They tell me the last guy to have seen a sunrise died last week. For as long as anyone else can remember, Necropolis has been shrouded in mists. You can wander the alleys or drive down the highways, but you always end up back downtown. No one knows when exactly the mists came or what they're made of. Some say it's an experiment in nanotech gone wrong, others say it's the souls of the dead, shredded by The Powers That Be like a legally damning document.

I know what you're thinking: But what about the matrix? A hacker friend of mine said it was like one giant private network. Everything is all wired together in a closed information loop. Hell, Necropolis even has its own private satellite beaming down remixes of decades old sitcoms. There are rumors that sometimes heavily encrypted but badly scrambled packets seem to slip in from.... Outside.

I once heard a story about a guy who very briefly managed to login to a system that seemed to be Outside. I wish I could tell you that he went mad and killed his own family after being possessed by some kind of demon. It was worse. He put on a suit and got a job; said he liked being "comfortable."

It doesn't matter whether the streets are in meatspace or cyberspace, it's as if the rest of the damn world just isn't there.

The rumors all say the corps are run by liches and vampires, but from what I've seen those guys are just middle managers punch drunk on petty power. The real answers, if there are answers to be had, lie with The Powers That Be. Whomever... or whatever... occupy those weird reflective obelisks downtown.. We call them "office towers'', but what kind of office building has no windows and no doors?

By now you might be wondering how anyone copes here in Necropolis. Most just get up, get to work, get home and get some sleep, just to do it all over again the next day. But a few of us... we have a different plan...

Necropolis is a cyber-gothic setting for The Sprawl. The player characters are cyberpunk professionals fighting corporations in a seemingly inescapable city which is possibly run by supernatural forces.

In order to download this supplement you must purchase it at or above the minimum price of $15 USD. You will get access to the following files: 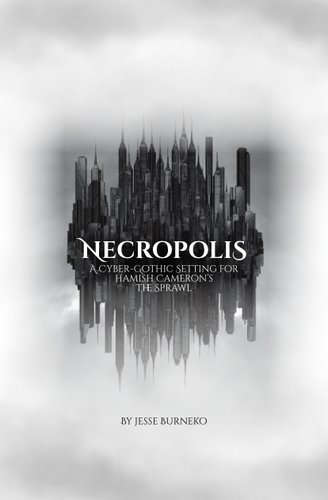